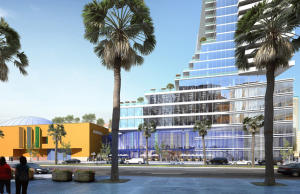 SAN JOSE — The city might be dubbed the Capitol of Silicon Valley, but luring high tech companies to downtown San Jose is not an easy feat.

Space constrictions and building height limitations because of downtown’s proximity to the airport have led major tech companies like Apple and eBay to build and expand their prestigious campuses in other parts of the city — mostly in north San Jose. Downtown is home to only one major tech company, Adobe Systems.

But a new project that includes expanding the Tech Museum of Innovation is geared toward changing the downtown landscape by building the innovative office spaces that tech giants like Facebook and Google are famous for. Courtesy Orloff Williams — Pictured is an artist’s rendering of a high-rise development called Museum Place, proposed for construction on Park Avenue in downtown San Jose, adjacent to the Tech Museum of Innovation.

“If we build it, they will come,” said Ernie Yamane, the principal architect of the Museum Place development, a 270 foot high-rise tower with office space, 185 residential units, retail and a boutique hotel with penthouses on the top floors. Yamane is a partner at the architecture firm Steinberg.

The 210,000 square-feet of “creative office space” will include larger floor plates, higher ceilings and more glass. And it also will boast a bonus feature never done in downtown before — terraced outdoor decks with panoramic views of the city — which Yamane said are perfect for beer and barbecue Fridays that have become a tradition among many tech companies.

“I think the tech companies haven’t come downtown because most of the existing office space has been 20,000 square feet with a core in the middle of it,” Yamane said. “But if you go to Google — they have large, open office environments with few walls. If you look at the new Facebook campus, they have all these outdoor areas that are mixed in with the office environment.”

Yamane, who worked on the new City Hall, the airport and the Tech Museum, said there are very few buildings that offer those features in an urban area. The Museum Place development, shown in this artist rendering, is a 270-foot high-rise tower with office space, residential units, retail and a boutique hotel on the top floors. Architects designing the Museum Place project say it will attract high-tech companies to downtown because of its larger floor plates, higher ceilings and more glass. The Museum Place project includes a 60,000 square-foot expansion of The Tech Museum of Innovation and a new use for the aging Parkside Hall. (Insight Realty Company & Steinberg) ( Insight Realty Company & Steinbe )

The project will include a 60,000 square-foot expansion of the Tech Museum. The city-owned Parkside Hall, an adjacent building often used by the museum for exhibitions, will be included in the project’s footprint. If the deal moves forward, the city-owned land would be transferred, sold or leased to the developer for the project, which city leaders say provides a bigger payoff to the public.

“This will add substantial jobs, revenues and taxes back to the city,” said Nanci Klein, the city’s assistant director of economic development. “The value of the space that will be created for the Tech will exceed the current value of land.”

The plan includes moving the Tech’s gift shop and restaurant to a more “pedestrian friendly” space on Park Avenue. The developer must first apply for a site development permit, said Planning Director Harry Freitas, but no applications have been received yet. It would then go before the City Council for approval to transfer the Parkside Hall property. Reutilizing the public land that Parkside Hall sits on has been a goal of the city for some time. The crumbling Parkside Hall has become a financial strain, city officials said, and the deal allows the city to rid itself of the property and replace it with a better use. The city had unsuccessfully tried to solicit public-private partnerships in the past to redevelop the land.

“The building has become obsolete due to age and condition, with growing costs to operate and maintain the building,” Kim Walesh, the city’s economic development director, wrote in a memo to the City Council.

The council earlier this month approved an agreement with Insight Realty Company to develop the $253.5 million project. Mayor Sam Liccardo, Councilwoman Magdalena Carrasco, and Councilmen Raul Peralez, Don Rocha and Johnny Khamis requested the developer provide evidence that it has funding for the project, which is backed by Chinese investors.

“In exchange for the city’s commitment of public land, the city should expect full transparency and public accountability,” wrote the council members. They also requested a cost-analysis comparing the value of the city-owned Parkside Hall to the value of the museum’s expansion, as well making sure the future hotel operator hires union workers.

If the project comes together, the unique design of the building — which features an outdoor glass terracing effect — would stand out against the rectangular high-rises in downtown San Jose’s skyline without overshadowing the iconic Tech Museum.

“What we tried to do is still feature the Tech as a main feature of that street,” Yamane said.

The unique mix of hotel, residential, retail and office is new to San Jose, but not to the real estate development world.

San Francisco, Chicago and New York have all reaped the benefits of similar towers with multiple uses, said Dennis Randall, the managing director of Insight Realty Company. With its living and retail space, the tower would be active 24 hours a day, Randall said, fitting into the city’s goal of making downtown an around-the-clock destination.

The Museum Place project includes at least 650 parking spaces. Randall said the goal is to have the entire project finished by 2019.