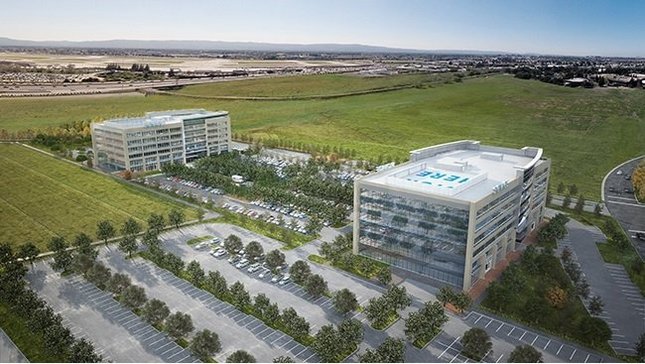 This is an interesting post about Apple expansion in San Jose. Conceptual image of a building that Apple has leased in north San Jose, part of a complex of two to three buildings being developed by realty firm Steelwave. (Steelwave photo)

SAN JOSE — Apple has grabbed a building in north San Jose that’s part of a site where the fast-growing company could eventually assemble enough property for 3,000 workers.

The 202,000-square-foot building that Apple has leased is located at 2509 Orchard Parkway near Trimble Road, according to multiple sources familiar with the rental deal.

That office project is next to vacant land on which Steelwave, the realty firm that owns the newly leased building and the empty acreage, could construct up to two more office buildings. The building is now under construction and was being marketed by Cornish & Carey, a commercial realty firm. Conceptual image of a building that Apple has leased in north San Jose, part of a complex of two to three buildings being developed by realty firm Steelwave. (Steelwave photo)

Cupertino-based Apple now has control of several parcels in north San Jose in the vicinity of Orchard Parkway and Component Drive, stretching as far east as North First Street and as far west as U.S. Highway 101.

“They are taking this building to control that entire neighborhood,” said David Vanoncini, a managing partner with Kidder Mathews, a commercial realty firm.

If all the sites were built out to their full capacity, over time, Apple potentially could employ up to 20,000 workers on the north San Jose properties.

Including the property that Apple has scooped up from Steelwave, the tech titan, primarily through purchases of property, could control enough office space and land for a total of 4.3 million square feet of offices.

“The reality is that Apple is trying to plan ahead,” said John McMahon, an executive vice president with Colliers International, a commercial realty firm. “Phase one is to secure the real estate for the innovations they are planning.”

Plus, north San Jose isn’t the only major expansion site for Apple in Silicon Valley. It’s just the latest.

Previously, Apple leased a 777,000-square-foot iconic building in Sunnyvale that’s just a few miles away from the spaceship campus that Apple is constructing in Cupertino.

Plenty of speculation surrounds what Apple is planning with its major new campuses outside of Cupertino.

Development of a new assortment of vehicle technologies is one possibility as the next big thing from Apple.

The Apple deals, along with other major expansions in north San Jose such as a new Samsung campus and indications that Google is scouting for sites in that part of the city, have coalesced to bring major changes to the north side of the Bay Area’s largest city.