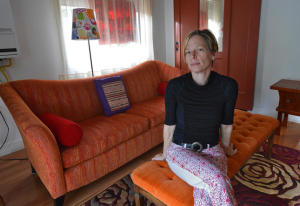 Beth Brown remodeled part of her Walnut Creek house so her ailing mother could live there with her. But when her mother died in March 2014, Brown didn’t want the charming, upgraded space to sit unused.

Now, people from around the world come to Brown’s home, renting the ground floor of the small house while visiting San Francisco, or preparing for a family wedding, or waiting for their house purchase or remodel to finish.

If Brown lived in San Francisco, she would be at the center of a fierce political debate over whether short-term rental sites such as Airbnb are wreaking havoc on the city’s housing market, a debate that will go before voters on Tuesday.

Instead, she’s part of a quieter discussion that is increasingly popping up in Bay Area communities about whether to regulate, or ban altogether, the rental of rooms in one’s home — or condo, detached “mother-in-law” unit or even an entire house.

Hosts say they embrace the social aspects of welcoming guests from all over the world into their homes, as well as the added income — especially appreciated with the Bay Area’s high cost of living.

“Sometimes a hotel isn’t what people need or want,” said Brown, whose home is one of more than 2 million listings worldwide on Airbnb. “It’s not like there is a plethora of other options here.”

Critics counter that using “mother-in-law” units or detached cottages for short-term rentals takes them out of the long-term housing pool, harming “workforce residents” and exacerbating the Bay Area’s housing crisis.

In San Francisco, Proposition F on Tuesday’s ballot would require both hosts and the rental platforms like Airbnb to file guest and revenue reports every three months. It also would also prohibit using “in-law” units — sometimes referred to as “auxiliary dwelling units” — for short-term rentals. Politicians, labor unions and Airbnb itself are lining up on one side or the other.

The Santa Cruz City Council voted Oct. 13 for a future ordinance to phase out short-term rentals of such “auxiliary dwelling units” after two years.

“In Santa Cruz, the city has encouraged development of accessory dwelling units with the idea of promoting affordable housing, especially for seniors,” said David Foster, executive director of Habitat for Humanity Santa Cruz County. “The demand for affordable housing in Santa Cruz is huge, and using them for short-term rentals diminishes the housing stock.”

Discussions in other communities focus more on quality-of-life questions.

In Danville, town staff is working on an ordinance to ban all private-residence short-term rentals outright. Town Attorney Robert Ewing said that work stemmed from complaints from several residents. Three residents from a neighborhood just east of Interstate 680 complained to the council on June 16 about a nearby home that hosts Airbnb renters. The main concerns: added traffic in and out of the neighborhood, parking issues and noise.

“I’m fearful it’s becoming like a motel situation,” resident Craig Gjerman told the council. “We put our life savings into our house. … This could become an insidious issue for the town.”

The Danville council is expected to vote on a resolution Dec. 15. Ewing said town staff hasn’t yet done research on the matters of parking, traffic at variable hours and noise that critics say can come with such short-term rentals. In any event, he said, Danville doesn’t have the staff to be in the regulation business.

As for the power of residents’ sentiments, Danville Councilman Robert Storer said at that June 16 meeting, “I think we have a neighborhood here that’s pretty passionate about it.”

Walnut Creek, by contrast, had not received a single complaint about short-term rentals as of last week. A check one morning this past week revealed 14 rooms or houses in Walnut Creek listed as being available for rent through Airbnb.

“We may look into whether or not we are receiving transient occupancy taxes for these rentals, as Airbnb is supposed to ensure tax collection,” said Sandra Meyer, Walnut Creek’s community and economic development director, adding that the city plans no regulation beyond that.

Other cities, including Antioch, also have no regulations; Berkeley has none but is crafting an ordinance that would require such units to be the primary residence of the owner or tenant, who must occupy it for nine months out of the year, and The League of California Cities supports Senate Bill 593, which would help cities collect transient occupancy taxes from private short-term rentals, much as hotels and motels pay, and charge guests.

But league spokeswoman Eva Spiegel said there is no one-size-fits-all recommendation for how cities approach the likes of Airbnb and HomeAway. There are, she said, many Danvilles, Santa Cruzes and Walnut Creeks out there.

“In some cities, it’s a real important industry; in others, they’ve found it doesn’t fit in with what they want,” Spiegel said. “Visitors spend money in your town, and they also use your roads and your police and safety resources.”

San Jose has a 10 percent tax on short-term rentals in the city (the same as the transient occupancy tax that applies to hotel and motel guests) and has other reporting requirements of hosts.

Such bans rub Beth Brown the wrong way. She’s pretty sure her Walnut Creek rental unit won’t ever become long-term housing, whatever the local law. And being both a short-term rental host and a long-term rental landlord, Brown said she knows which renters almost always present more problems, both to their landlords and to their neighborhoods.

“There’s just a higher standard when you’re a guest at somebody’s house, and we don’t want bad reviews,” said Brown. “People act like renting out rooms in one’s home is a new thing, but it’s as old as God. Jesus was literally born in someone’s shed.”