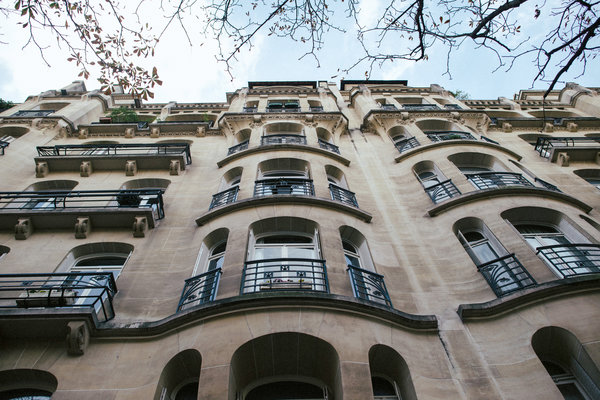 A FOUR-BEDROOM APARTMENT ON THE RIGHT BANK

This second-floor apartment is in a 1912 building designed by the architect Albert Sélonier in a transitional Art Nouveau style, blending the parquet floors, high ceilings and traditional moldings of the Haussmann era  with geometric design elements that were forward-looking for the time. The décor is by Kara Molinari, an interior designer, and features bespoke carpets and artwork. The furnishings in the 2,940-square-foot space will be negotiable as part of the sale. A spacious terrace shaded by an awning overlooks an interior courtyard.

“My idea was to bring the flat into the 21st century with classic style,” Ms. Molinari said. The focal point of the apartment is a traditional entry hall, with large paned doors opening into various rooms. Walls and woodwork in shades of dark blue are set against a gilt-framed mirror, a leopard-print rug and a settee upholstered in gold fabric.

To the left is an open-plan living and dining space, which is divided by Doric columns. Painted on the ceiling above the Jean Prouvé dining table is a geometric design inspired by the Russian Constructivism art movement of the 1920s. The living area features sofas by Philippe Starck, an Artemide Mercury light fixture, and a carpet designed by Ms. Molinari.

Beyond the living room is the master bedroom, which includes a walk-in closet and a boudoir with a Murano glass chandelier and gold leaf artwork by Ms. Molinari. The master bathroom has a 10-foot-long shower area, a free-standing tub by the Australian company Victoria & Albert, and matching floor and ceiling tiles by the Spanish company Porcelanosa. Ms. Molinari has embedded LED lights above the tub to create an impression of a night sky.

The modern eat-in kitchen, to the right of the entry hall, has a Siemens side-by-side refrigerator/freezer and induction cooktop, and sleek, integrated cabinetry, with quartz counters, made by the Italian company Arrital to Ms. Molinari’s specifications. Doors open to the terrace.

Down the entry hall is a family room and library with a custom carpet, a fireplace and doors that open wide to the terrace. At the far end of the entry hall, a service corridor with laundry facilities leads to the other three bedrooms and two full bathrooms. There is a storage room in the basement as well as parking under the building.

The apartment is in the Trocadéro neighborhood, in the 16th arrondissement, across the Seine from the Eiffel Tower. The 16th is one of the largest arrondissements in the city. The area is served by the No. 6 Metro line, and offers easy access to the Périphérique ring road around Paris. Orly airport is about 30 minutes’ drive; Charles de Gaulle airport, about 45 minutes.

Foreign buyers have long gravitated toward the city’s historic core — the arrondissements, or districts, on either side of the Seine. On the Left Bank, that means the Seventh around the Eiffel Tower and the gallery- and boutique-lined streets in the Sixth along the Boulevard St.-Germain, which runs roughly east to west a few blocks in from the Seine.

The city’s highest real estate prices can be found in the Eighth Arrondissement on the Right Bank, home of the “Golden Triangle” of luxury shopping and hotels, followed closely by its neighbor to the west, the vast 16th arrondissement.

While Paris may have been eclipsed somewhat by the glamorous new high-rises of New York and London, overseas buyers value the city precisely because the pace of development has been slow, agents said. The market remains a conservative one, with little foreign demand for properties in gentrifying or trendy neighborhoods.

“People come to Paris to buy the typical Paris flat,” said Alexander Kraft, the chairman and chief executive of Sotheby’s International Realty France, which is listing the apartment. “They want the parquet floor, the moldings, the fireplace, the balcony that runs around.”

Home prices in Paris saw a run-up in the 2000s that largely continued through the collapse of Lehman Brothers, agents said. But uncertainty surrounding the presidential election of 2012, won by the Socialist François Hollande — who ran partly on a platform of raising taxes on the wealthy — sent prices tumbling.

“We were for over 10 years in a seller’s market,” said Marie-Hélène Lundgreen, the director of Belles Demeures de France, a subsidiary of Daniel Féau, which is a Christie’s affiliate. “Then in 2012, the elections, it was completely the contrary. We got into a buyer’s market with more inventory and prices went down.”

Prices have fallen about 15 percent since 2012, according to a report from Ms. Lundgreen’s agency. But the market has shown signs of rebounding, with the number of transactions rising, if not prices, in the  past 12 months.

“We are not expecting prices to go up again immediately,” Ms. Lundgreen said,  “but we see inventory coming down, and the market might change into a seller’s market again.”

Part of that activity is because of the weakness in the euro, agents said, but equally important is that sellers have started to negotiate more and even have cut prices.

“Finally, at the end of last year some sellers started to adjust prices,” Mr. Kraft said. “These days,  you bring an offer of minus 20 percent and sellers will say, let’s talk.”

WHO BUYS IN PARIS

The luxury market in Paris — for apartments $2 million and over — is notable for its diversity. “There’s not one predominant group, really,” Mr. Kraft said. In the last year, “Americans have come on strong,” he said, with the number of buyers from Russia and China falling sharply because of economic and political factors in those countries.

Data provided by Ms. Lundgreen showed that in 2014, 32 percent of buyers were from the Middle East, 23 percent from Europe and 19 percent from North America, with the remainder largely from Russia and Asia.

According to a survey from BNP Paribas, the number of properties in France sold to overseas buyers rose 1.5 percent in 2014, after falling the previous two years — 1 percent from 2011 to 2012, and 13 percent from 2012 to 2013. That upward trend continued through the first five months of 2015, the survey found. Corresponding to the strength of the dollar and the British pound against the euro, the number of American buyers increased by 12 percent in 2014, and the number of British buyers by 33 percent.

“Frankly, in comparison to other big capitals, Paris is quite cheap, really,” Mr. Kraft said. “Maybe one-third the price in New York or London. The attraction is very diverse, and this is reflected in the nationalities. For some, it’s fashion, for others it’s business.”

There are no restrictions on foreign buyers. All transactions go through a notary, who is responsible for details like contracts, verifying the legality of the deed and ensuring that taxes are collected and paid.

Buyers should budget about 8 percent to 10 percent of the sales price for taxes and notary fees, the majority of which are transfer taxes. It is usually not necessary to retain a lawyer.