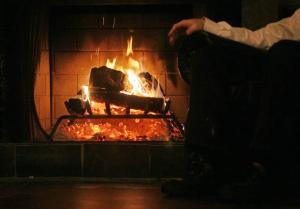 SAN FRANCISCO — Wood-burning heaters — including modern pollution-fighting wood stoves — will not be permitted in new homes built in the Bay Area starting next fall, as part of a first-in-the-nation ban approved by air quality regulators Wednesday.

The new rules, approved unanimously by the Bay Area Air Quality Management District, will also require every seller of an existing home with a wood-burning fireplace to give buyers a disclosure statement warning of the health risks of wood smoke.

Even wood stoves certified by the federal Environmental Protection Agency as low emission would not be allowed in new homes whose construction begins after Nov. 1, 2016, in the seven Bay Area counties, plus southern parts of Sonoma and Solano counties. The Bay Area has become the first region in the nation to ban wood-burning heating devices even modern stoves — in new-home construction. (Mathew Sumner/Staff file photo)

The air board also pledged to eliminate all exemptions to a wood-burning ban on Spare the Air days in five years. For example, people are now exempt if they don’t have natural gas lines in the neighborhood.

“We are serious about reducing the health risks associated with our residents’ exposure to wood smoke,” said Kristine Roselius, an air district spokeswoman. “We are strengthening a rule that has been successful in protecting public health.”

District officials and scientists say the ultrafine particles from smoke that lodge deep in the lungs can trigger asthma and bronchitis attacks and increase the risk of strokes and heart attacks.

Wood smoke accounts for about 39 percent of the fine particulates in low-lying air in the Bay Area on cold winter days, the air district estimates.

The ban does not apply to gas or electric heating devices such as fire logs or fireplace inserts that have become increasingly common as the popularity of wood has waned.

The new seller disclosure requirement replaced a controversial proposal that would have required home sellers to replace old fireplaces or high-emission wood stoves with cleaner-heating devices even if it costs them hundreds or thousands of dollars. Homeowners and real estate sales representatives vehemently opposed that idea when it was proposed by the air board earlier this year.

A spokesman for the home-heating appliance industry denounced the rule changes as unnecessary and unfair.

“I think this is an overreaction,” said John Crouch, spokesman for the Hearth, Patio and Barbecue Association, which represents both wood- and gas-fueled heating products. “I don’t think other pollution boards will take this approach.”

He predicted the changes would cause hardships for low- or moderate-income, semirural families who rely on wood or pellet stoves for heat — especially in areas that do not have access to natural gas pipelines.

The Sierra Club and League of Women Voters, however, supported the change.

To ease the burden on those who burn wood to heat homes, the air board pledged to put up $3 million in rebates to cover at least half of the cost of replacing old wood-burning devices with modern, cleaner-heating ones.

Details of the rebates are being worked out, but priorities will go to low-income residents, air district officials said.

WHAT THE ACTION DOES

Bans indoor wood-burning heating devices in new homes begun after Nov. 1, 2016.
Requires home sellers and landlords to disclose the health hazards of burning wood from a heating device at their properties.
Provides $3 million in rebates to subsidize homeowners’ costs to replace an old fireplace or other wood-burning device with a modern, cleaner-heating one.
Requires all fireplace or chimney remodels costing $15,000 or more be replaced with modern device meeting EPA standards, or a gas or electric heating device unless the device is already EPA-certified.
Spells out that homes with no permanently installed gas, butane or electric heating option must register with the air district to get an exemption from the no-burn rule on Spare the Air days.

For more information, go to www.baaqmd.gov.