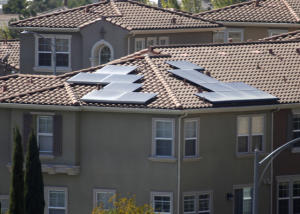 This is an interesting post if you are interested in installing Solar panels.  Last year we did contact with 2 Solar providers and the cost was way prohibitive since we are only an average of $110 per month of electric bill.    But there could be other justifications since some providers claim that adding Solar panels ads 10% to the value of your house; not the mention that tax credits that are expiring in California.

But if you are living in a condo, the story is very different and any exterior modification has to be approved by the management of the condo association which could be a huge political battle.

SAN JOSE — Ilam Mougy wanted to green up his condominium with solar power.

The 49-year-old software engineer won approval to install panels on his home from PG&E and the city of San Jose. He expected little trouble from the Tuscany Hills homeowners association since another neighbor had an array on his roof. He was wrong.

The association claimed ownership of the roof and ordered all the panels removed. Mougy was fined $300 and the cost of fixing the red clay tiles.

He was baffled: “I wasn’t trying to upset anyone.”

Despite state laws limiting the control that homeowners associations have over solar installations, green advocates say the groups are a steady challenge to extending the systems to more residential rooftops. Solar panels on San Jose resident Ilam Mougy’s home will be removed and sent back to the dealer after his homeowners association said he did not have their permission to place the panels on the roof. (Patrick Tehan/Bay Area News Group)

The disputes pit two powerful and growing forces against each other.

Investment in solar installation in California last year topped $11.7 billion, a 66 percent jump from the previous year, according to industry figures. The spread of small residential and commercial arrays has spurred industry expansion to an estimated 54,000 employees across the state.

At stake is the expansion of the solar market into more residential communities. Solar installers say the time and costs of completing a lengthy HOA application can delay construction by months, eat up a project manager’s time, and ultimately frustrate homeowners and kill demand.

When it comes to solar installation, he said, “homeowners actually have extensive rights.”

State lawmakers established the California Solar Rights Act in the 1970s and regularly have updated the law. The act limits the restrictions an HOA can place on solar installations. A board can’t reject an installation for aesthetic reasons. Last year, lawmakers made it harder for community organizations to alter construction plans, stating that a board cannot call for modifications that increase construction cost by $1,000 or reduce the efficiency of the system by greater than 10 percent.

But the law and its application often remain muddled. The trade group California Solar Energy Industries Association cited these examples of complaints within the past four months: