Why Wall Street cares a lot about Argentina’s elections 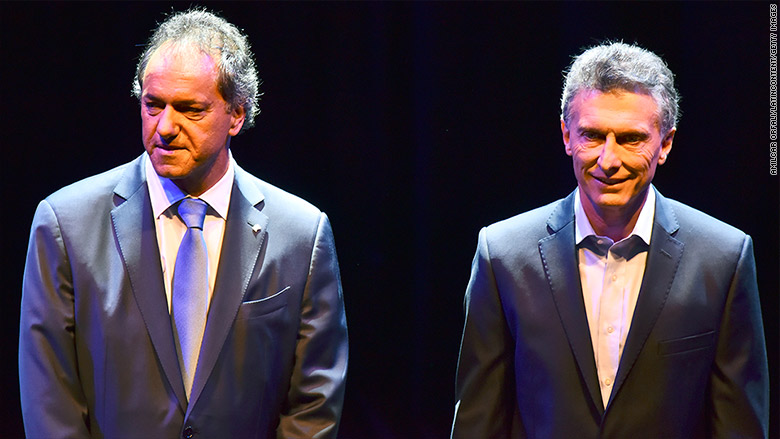 Wall Street hedge funds have been waiting years for this day.

Argentina will elect a new president Sunday who could finally end a decade-long battle between the hedge funds and Argentina over huge debt payments.

Cristina Fernandez de Kirchner, and her predecessor and late husband, Nestor, have governed the country for 12 years. They’ve refused to pay the hedge funds the entire time.

That fight could end soon, and it’s a major issue heading into Sunday’s elections.

Both candidates, Mauricio Macri and Daniel Scioli, have suggested they will resolve the debt problems with the hedge funds.

However, their solutions are very different. Scioli wants to maintain some of Kirchner’s policies while Macri wants to rewrite the playbook on Argentina’s economy.

But settling with the holdouts, along with implementing new reforms, will likely hurt Argentina’s economy in the short term, expert say.

“Argentina appears to be at a crossroads,” says Win Thin, head of emerging markets currency strategy at Brown Brothers Harriman. “After years of economic mismanagement, the people could finally vote for a change of government but the economic adjustment will be painful.”

The unresolved debt debacle has shut out Argentina from much of the global economy while it has suffered from massive inflation, declining cash reserves and meager economic growth.

Wall Street wants Macri to win. He has promised major economic reforms and appears most likely to settle with the holdouts. Macri is currently leading in the polls.

Macri was in second place during the first round of voting in October, behind Scioli. But the results, which surprised many, were too close in the first round, prompting Argentina’s first ever runoff election.

Since October, Macri has gained favor in the polls.

Related: Venezuela is running out cash, selling its gold

Argentina’s record-breaking default and the ‘vultures’

The hedge funds, led by the billionaire Paul Singer, want about $1.5 billion from Argentina.

Argentina broke the record books when it defaulted on $95 billion of debt in 2001.

Singer’s fund, NML Capital, and others scooped up the nearly-worthless debt soon after the default, then waited while the debt gained value and now they want full repayment.

Over the years, the Kirchners renegotiated terms with 92% of its creditors so that they would accept a huge discount, or “haircut,” on debt payments.

These hedge funds are called vultures for picking up cheap, worthless debt of developing countries, then suing them afterward for much more money.

Related: More Mexicans are leaving the U.S. than arriving

In fact, Argentina tried to pay the creditors that agreed to the lower amount, but Griesa blocked the payment last year. The judge said that Argentina has to pay the holdouts and other creditors at the same time. Negotiations between Argentina and NML last year failed to reach an agreement.

Until Argentina settles with the holdouts, its economy essentially can’t grow much because it can’t get access to foreign investment.

Another problem is that Argentina, under Kirchner, has manipulated its currency, started massive spending programs and lost the trust of many independent economists inside and outside the country.

Investors can’t wait for a new president but they clearly prefer Macri. Argentina’s stock index, Merval, is up 66% so far this year, and experts say the rally is largely driven by optimism that the next president will resolve the dispute and open up Argentina’s economy to foreign investment.

“If [Macri] prevails, the outlook for the economy would undoubtedly brighten,” says Edward Glossop, an emerging markets economist at research firm Capital Economics. “The prospects for reform are higher now than at any point over the past decade.”

Related: Colombia could profit from its peace deal to end civil war