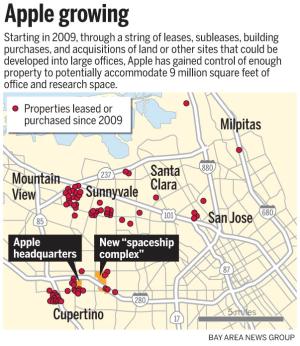 Apple is known for inspiring “gee whiz” reactions to its cutting-edge gizmos such as smartphones, tablets and watches, but now the tech titan is drawing a new round of “wow” responses to its stunning shopping spree for office space, buildings and land in Silicon Valley.

“This is really incredible. It is aggressive. It’s a land grab,” said Chad Leiker, a vice president with Kidder Mathews, a commercial real estate brokerage. “This is a major investment in Silicon Valley. It’s pretty amazing.”

Cupertino-based Apple now has about 25,000 employees in the Santa Clara Valley, but a series of long-term leases and building and land acquisitions over the past four years, including its new under-construction “spaceship” campus for as many as 13,000 workers, would allow the company to nearly double that workforce in the coming years.

Some of the deals will help ease the temporary squeeze on capacity while waiting for the new campus with its unusual circular design to be done in late 2016, but real estate analysts say the string of multiyear leases and outright acquisitions show Apple’s real estate appetite to be a more permanent investment in the region.

“For a company like Apple that is so innovative, the reality is that a lot of their operations have to be here in Silicon Valley,” said John McMahon, an executive vice president with Colliers International, a commercial realty brokerage. “They need to be near the best talent pool. One way of keeping your employee base and expanding it is securing the spots and desks for the intellectual talent and making sure they are there for the next wave.”

While Apple declines to detail what it will do with all that space — whether it be for design, marketing, research or even ventures related to the car market — the company does indicate the land and building deals in Cupertino and beyond to Sunnyvale, Santa Clara and North San Jose show a commitment to its future in the Bay Area as a region.

“We’re proud to call the Bay Area home, and we’re continuing to invest, give back and create a huge number of jobs,” Apple told this newspaper. We want to make a positive impact on every community where we operate and we look forward to doing even more as we continue to grow here.” An artist’s rendering depicts an aerial view of the Central & Wolfe office development proposed to redevelop a business park currently occupying the 18-acre parcel located at Central Expressway and North Wolfe Road. Apple is said to have entered into an agreement to lease the entire 777,000-square foot campus. (Courtesy HOK Architects and Landbank)

Of course, more building by Apple and other tech firms in Silicon Valley means the thousands of new tech workers filling those cubicles and research labs will be looking for housing and clogging the roads — a worry for regional planners who fret over inadequate mass transit and a shortage of high-density residential units.

“It’s wonderful news that great companies like Apple are expanding in North San Jose rather than in North Texas,” said Carl Guardino, chief executive officer of the Silicon Valley Leadership Group. “This will create job growth for our economy.”

But Guardino acknowledged the challenges posed by such growth.

“The two top concerns we hear about consistently from our member CEOs are housing and traffic, which really are the flip sides of the same coin,” Guardino said. “We need to accommodate more opportunities to build homes.”

Even with those challenges, the economic boom in Silicon Valley that has had a five-year run is one that Apple executives clearly see as sustainable.