Why this 10-year-old is excited about science 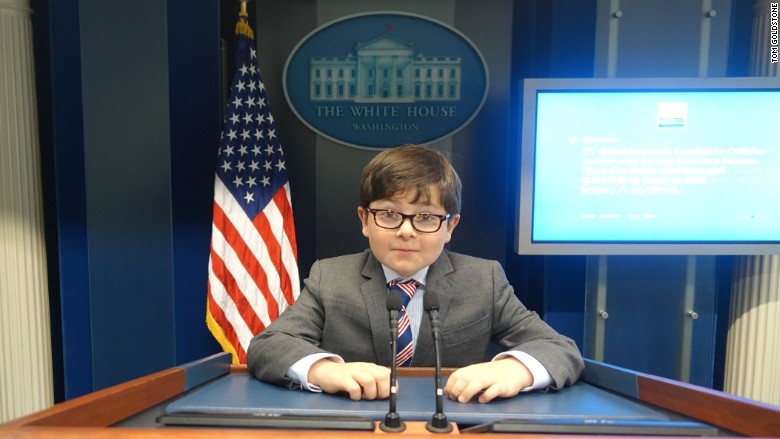 On Tuesday at the State of the Union, President Obama talked about the dreamer who stays up late working on her science project, and the teacher who comes early to school with extra supplies because she knows that one day one of her students will cure a disease.

On Wednesday, I met some of those dreamers and teachers at a White House event designed to inspire students to pursue careers in STEM (Science, Technology, Engineering and Math). More than 100 students attended — ranging from elementary school all the way to college.

Before the main event, I visited some really cool exhibits that had been set up around the auditorium, including the Green Bronx Machine. They grow fresh produce in schools with artificial sunlight — they can even do it in basements!

Another thing I thought was really cool were the 3D-printed molecular cells that you could play with like toys. Their designer was even more surprising. James Tyrwhitt-Drake works for the National Institute of Health 3D Print Exchange. He studied science but says he’s an artist first and a scientist second!

“I try and make it so that people can understand and experience science as directly as possible,” he said. Holding in my hand a 3D model of a virus, I felt amazed because mixing art and science was so new to me.

Like most kids, my school day is divided up into separate blocks of time for specific subjects. I have math in one room, art in another, science in a lab, PE in the gym.

Related: The most innovative schools in America

On Wednesday, I found out about erasing lines and making a “mash up” of subjects. Megan Smith, the Chief Technology Officer of the United States, introduced me to this.

She said, “when you mix wonder, love and play, science is fun.”

Smith (who used to work at Google (GOOG)) said her job was to “harness the power of data, innovation and technology for the nation.” She said bringing together different people with different skills can solve the world’s most difficult problems.

Like during the Ebola outbreak of 2014, doctors said their protective suits were hot and uncomfortable and scared kids.

Smith said that wasn’t good. So the White House put together a team. It had doctors and engineers, of course, but also a wedding dress designer, artists and children. In the end, they worked together and created a suit that did not scare patients and was comfortable.

Related: This is how you make math fun

See? Science can be fun and useful. But how do we get kids to “get” that?

Well, I asked that question, and one of the panelists told me that kids need to follow their interests. Alvin Drew is a former astronaut and he said that kids who might love their iPad a little too much should look behind the tablet to see “what drives the screen, what causes those signals to go to and from it? If you’re curious about that, go dig into that. If something piques your curiosity, go follow that trail for as long as you can.”

But then there are some kids who are not as curious. So what should teachers do about them? Smith has an idea. She said, “The president talked last night a lot about hands-on math and science. And so couldn’t we teach math and science more like we teach music and PE and art? So that we do it together first and then get a little instruction.”

If that happens, kids will be excited when science comes around. And if kids are excited about science, we will have tons of engineers and scientists and astronauts and doctors to make the world a better place!

How did Max end up at the White House? It began with a chance encounter Max and his father (Tom Goldstone, executive producer of “Fareed Zakaria GPS”) had on 5th Avenue in New York. A photographer asked to take their picture — it turned out to be Brandon Stanton, who runs the popular “Humans of New York” blog. In Brandon’s caption about Max, he said Max wanted to grow up to be a journalist like his dad and wanted to interview the head of NASA. A few days later, NASA asked Max to come to Washington to do just that. When the White House was looking for “kid reporters” to come to their STEM event, they remembered Max’s NASA “scoop.”