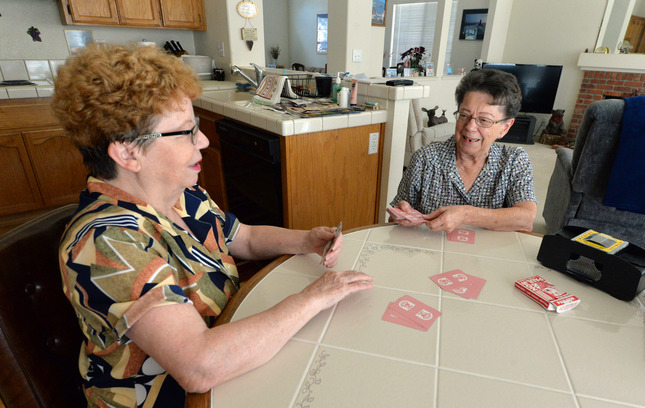 This is an idea whose time has come specially with the housing crisis in Silicon Valley where 2 income families can not afford to buy a home let alone seniors on fixed income. Marilyn Philbin, 73, left, of Livermore, and her roommate Muriel Morua, 74, play cards at the home they share in Livermore Sept. 24, 2015. The retirees share a house rather then moving to a retirement community. (Doug Duran/Bay Area News Group)

They have their own rooms, their own views. And, happily, a mutual love of liver.

Marilyn Philbin and Muriel Morua, both in their early 70s, are good friends and — as of six months ago — housemates. They’re sharing Philbin’s Livermore home in “The Golden Girls” fashion, splitting expenses, divvying up chores and keeping each other company — an increasingly popular and practical option for older single people who want to maintain independence, yet don’t want to live alone and can’t afford a retirement community.

“I really hated living alone,” Philbin says from a comfy chair in her spacious, pin-neat family room. “My husband of 50 years passed away in January 2012. I found I would get depressed for missing him. But I didn’t want to move somewhere. I wanted to be free to come and go as I wished. So I was very happy when I heard from Muriel.” Muriel Morua, 74, left, of Livermore, and roommate Marilyn Philbin, 73, have their photo taken at the home they share in Livermore on Sept. 24, 2015. (Doug Duran/Bay Area News Group)

Morua, seated a few feet away in her own recliner, nods in vehement agreement. “We have so much in common. We’re on the same wavelength,” she says. “We like the same TV shows. We both like liver, and there’s only one place in town that serves it, at the Railroad Cafe, so we go there about twice a month.”

The two had worked together in the mid-1980s at the old Gerber plant in Oakland and reconnected online last year. Muriel was living in Texas to be near her son’s family but not happy with her situation either. Her rent was going up more than she could afford on her fixed income. Living with her son wasn’t practical for numerous reasons.

So Philbin offered her a deal too good to refuse. “I told her she could live rent-free in my extra bedroom for the period of one year, after that we’d renegotiate.” Morua moved in this past March, and they’ve loved it so far.

“We both know when to keep our mouths shut and not offer solutions to the other’s complaints — everybody needs to vent now and then,” Philbin says. “We split food bills and pay for our special extra items individually. We remind each other about our pills. We go on tours with the senior group. We each have a bedroom and bathroom that is our private place. We are responsible for keeping that place clean.

“This situation has worked for both of us.”

It’s not for everyone, though. As with a roommate situation at any age, sharing involves compromise. Conflicts can arise over household issues — and usually not in the humorous fashion of the 1980s sitcom “The Golden Girls,” where four mature women with very different personalities lived together.

Philbin has a friend who tried renting a room to another senior, and it failed. “That person kind of invaded her space,” she says. “She’d go through the refrigerator and throw out her stuff.”

“One of the things we hear a lot is that people do want to age in place,” Harrell says. “In our latest survey, 8 out of 10 people over 65 want to stay in their own homes or a home environment as long as possible.

“Shared housing is a great option for someone that’s open to it,” he says. “It can provide companionship, save costs, provide a feeling of security having other people in the home.”

According to AARP figures in 2013, 4 million women 50 and older were living in U.S. households with at least two women in the same age group. As people are living longer and facing rising health care and housing costs, shared housing can really fill a need.

Muriel Morua, 74, left, of Livermore, and roommate Marilyn Philbin, 73, have their photo taken at the home they share in Livermore on Sept. 24, 2015. (Doug Duran/Bay Area News Group)

But finding the right roomie can be a daunting task. While many commercial services can be found online, most don’t screen potential housemates and merely offer a space to connect with others seeking to share. MatureRoommates.com posts requests for cohousing. GoldenGirlsNetwork.com offers a nationwide database and guidelines for sharing but notes, “We do not do the matching for you.”

Harrell suggests a starting point of the National Shared Housing Resource Center. It, too, is not a matching service but provides referrals to local agencies and information on things like roommate agreements.

“This kind of living arrangement will be growing in the future,” he says. “The baby boomer population is obviously getting older and living longer. This is really an untapped potential. More people should be doing it.”

Jackie Mullarky, 66, had two spare rooms in her Santa Cruz home and hoped to rent to women in her age group but didn’t want to just post an ad on Craigslist. So through Senior Network Services, a small agency serving Santa Cruz County, she found two women in their 60s who needed housing. They worked out a rental agreement, and they’ve lived together harmoniously for the past three years.

“We’re not like the Golden Girls in the sense of hanging out together,” Mullarky says. “We all have our own lives. Our own car. We all have family in the area, so we are not as close as the women on that show, but we see each other several times a week. We have our own bedrooms and bathrooms and share the kitchen.”

Mullarky says she was surprised and saddened to find out how hard it is for seniors to find affordable housing. “My roommates could not afford a retirement community, an apartment or house on their own,” she says. “A room in a house is an affordable alternative.

“I have no reservations about recommending it to people at all. I was very lucky to find two ladies, and we get along very well together.”